Up Old Meyers Grade and Over Echo Summit 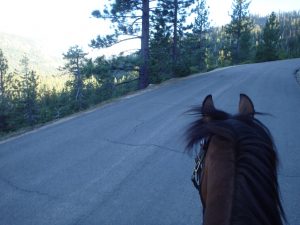 After a short night and a day working, I leave to head to my last ride section for the 2019 Re-Ride. This leg was in Meyers! Thankfully Jan & Chris were able to come help and be ride support for me to shuttle my rig to my end point. We had scouted a couple of weeks before to figure out where to stage the trailer and discovered that HWY 50 & 89 was a construction zone! Caltrans is putting in a round-a-bout! Yikes lots of heavy equipment, cones, erosion tarps – how will Red handle all that! Thankfully my ride was not until 7PM so not much going on at the site. I scouted out that the Divided Sky Bar had a great parking lot to stage the trailer. Plus they served great food. I met Jan and Chris at the bar! I know the oath ….. no drinking, I didn’t, at least nothing with alcohol. We keep an eye on the website and as the mail is approaching Stateline start getting Red saddled up. Ride Captain Rich calls to talk about where we are going to do the exchange and I learn it is behind the Agriculture Station on HWY and I will be riding against traffic on HWY 50 – we’ll see how that goes. The week before Rich had called me to find out if would be able to ride the next leg too, as the rider who was supposed to ride there was injured. I offered to ride part of it as it is a big climb (1200+feet) in 4 miles, we agreed that I would ride the Johnson Lane Pass section which takes you up and over Echo Summit until you hit 50 again. 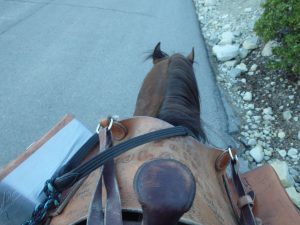 Red is saddled and we ride over to the start point while Jan & Chris take Siena along. I think Siena was hopeful that she would get to run along again! We meet up with a few folks at the exchange location while waiting for the inbound rider. Included David! from Kansas who has been following the Re-Ride since St. Joseph. The CHP Officer arrives and we talk about my route and where I needed him to stop traffic along HWY 50. Nice to have CHP support to stop traffic for me to go along HWY 50 across the bridge and then again at the top of Meyers Grade to cross 50 to get to Johnson Pass. Wonderful to have the support. Not long and we see the support vehicle of the inbound rider arrive and then the shout “Rider” to announce that we can see the rider coming down the bike trail towards the exchange location. The mochila exchange and off we go – I hear Siena whine a bit about not being allowed to run along – she is in great hands with Jan and Chris who will meet me at my exchange spot. We ride along the bike path across a couple drive ways and then merge onto (against traffic) HWY 50. As we approach the construction zone, I slow Red down a bit. Expecting him to do a double take on a few of the obstacles along the road. 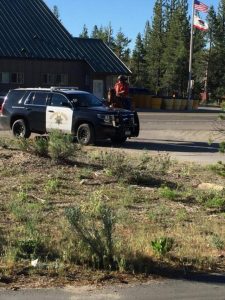 Thankfully at this point CHP had stopped the traffic coming towards us and we have a clear road. Red does a bit of a double take on the erosion tarps (you know those things swallow horses in one piece- per Red) and I expect him to veer into the road a bit more. I hear Rich in the follow car “We’ve got you” to indicate that they are keeping traffic behind them. Seems Red heard that and decided he wasn’t going to be eaten alive and kept going. We cross the bridge and turn into Upper Truckee Road. Here is where the support team has to take the long way around and Red and I go up the Old Meyers Grade. We rode this section last year so we knew it and take some of the steeper sections at a walk. We come across a few dog walkers and hikers on the route. I greet them with “Pony Express Mail Carrier” and exchange a few pleasantries. As I look ahead, I see something – but it takes me a bit to realize what it is. A GIANT Boulder on the road! WOW – slightly relieved that it didn’t come down while we rode past, but uneasy to get past it as I am sure there is more to come! We get to the top of Meyers Grade where it intersects Hwy 50 again, I already see the flashing lights from the CHP cars. One of few times that I am happy to see flashing lights from a police car! We wait until they have stopped the traffic in both directions and ride a bit down the Hwy to get to the start of Johnson Pass Road. The beginning of Johnson Pass is a very zigzaggy steep road. We are now over 7K feet and climbing. Along the road are a few snow patches that remain from the big winter we had. After I make it past the zigzag, Rich drives past to get ready at the next exchange spot. Then I see David (photographer) who is next to us for a bit taking some photos. He falls back and I realize I should get a photo of him, I ask him and his wife (driver) to pull up next to me so I can take a few photos of them. 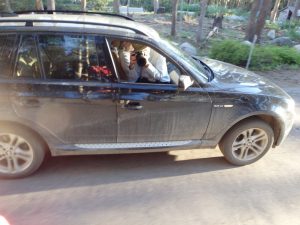 We see our trailer ahead and I see the next rider just past the trailer. We hand off to to Jerry Bestpitch who takes it along Hwy 50 for a bit. We let Red cool down and unsaddle and load him. Yes, Siena was happy to see us! Thanks to my awesome support crew for my California leg – Jan & Chris Lynds!