Meeting members and riders at exchange.

From West Virginia, I was encouraged to submit a report as a welcoming person at the exchange for the riders. A little background first. My first encounter with the annual Pony Express Re-ride was at Old Sacramento in 2007. While touring CA. I had stopped at the Visitor’s Center for literature, after handing me the information the lady said “by the way the Pony Express will arrive at 10:45”. I waited for the riders and learned about the Re-ride, met many friendly NPEA (National Pony Express Association) members and decided it would be a fun endeavor to participate in. That being the last exchange I would need to wait until the next year to see the Re-ride again. I decided to become a member of the Nevada NPEA. I am so blessed that the Re-ride happens during my annual visit to Nevada. I have had many pleasant experiences with the exchanges and the great people participating. Each year there was so many exciting activities to enjoy. I really enjoyed the 150th anniversary Re-ride celebration at Genoa, NV. in 2010. I have missed two Re-rides, one in 2011 due to rescheduling for the Equine Herpes, and 2015 due to my surgery. It is with great pleasure that I take lots of photos of the exchanges. I usually have a few letters in the Mochilla and like to have photos to share with the people who will receive the letters.

At the 2019 Re-ride I was only able to participate at the Carson City exchange due to health issues. I had been keeping up with the Re-ride Via the computer at the Carson City library the post came in that the rider was near Dayton. I knew the exchange was near Curry and Third. My son and I hurried to Curry street and saw the horse trailers in the parking area near Curry and knew we found the right place. Ron Bell recognized me and welcomed us. He introduced me to Sam (Samantha) Dimuzio, the outgoing rider. We hung around and visited with Mr. and Mrs. Ron Bell and horse Dan, Sam and Apache, her horse. A few more people started arriving and we moved down the parking lot toward Curry Street to greet the incoming rider. The call came “Rider in” as Anne Martins came riding down Curry Street. Anne gave the Victory sign with both arms raised upward. The Mochilla was exchanged to Apache, Sam mounted and rode out. I tried to post some photos not sure if it happened. ” Go Pony” 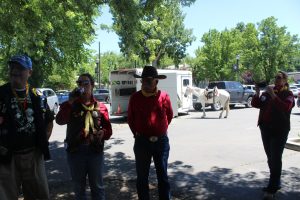