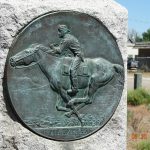 I wanted to share the write up of Chloe Young, 4H Youth rider that shadowed me on the re-ride. One hundred and fifty-six years ago, when there were no railroads and the telegraph wasn’t yet invented, horses and their riders carried the public’s mail. From California to Missouri, these riders went back and forth with news. They were the Pony Express! Though the Express lasted only 18 months, it is one very important event in U.S. history. As of 1960, a re-ride of the pony express began. This year (2016), Continue Reading

Sabetha KS 2015 Went to Sabetha, to meet my great niece, Whitney. While visiting with her and her maternal family, I notice the Pony Express Race signs. I was, like, OMG, this is where, they ran the pony express race. After Goggling, the National Pony Express Race Association webpage, I contact Daniel with the Kansas Division, if I could ride for Kansas. After receiving, “If you are willing, to drive that far, from Cushing OK to Sabetha KS, we will give you three miles, at midnight. I said, “Great, I, Continue Reading

The Berkley riders arrived in Elwood, Kansas just as the last Kansas rider arrived to hand the Mochila off the the first Missouri rider, ahead of schedule at 2:30pm CDT. Bruce and Susan Lousberg and Matt and Joyce Holt drove 11 hours from North East Texas to ride with Doug and Tyler Berkley on the re-ride, it was well worth it! Here are Susan’s Photos.

The Colorado division under CO director Linda Dolzal picked up the mail at Chappell, NE last night at 10:08 pm. Riders had a beautiful night ride and delivered the mail to NE at Big Springs 2:37 pm by my watch. The Chamber of Commerce held a BBQ for the riders and folks at the Julesburg, CO visitor center prior to the night’s ride. Western music was play by Rigg Leachman past Pony Express rider. Relaxing and enjoyable prelude to the transfer of the mochila at Chappell. 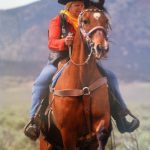 The weather wasn’t too friendly here in C/E Nevada for us to get on our “ponies” and get them conditioned, but finally a few days with no rain, the wind died down, and we brushed the dust off the horses and saddled up and we were off and running. My granddaughter, Nicole, a new horse owner of just a couple of months, but with a couple of years of riding experience and a love for horses (what teen girl doesn’t love horses?) wanted to ride “the Pony.” Daughter, Karen, and, Continue Reading

The weather received an A+ for this year’s Re-Ride in southwest Nebraska. Very little wind and temps in the 60’s. A slightly cloud-obscured moon that has waned a bit from full helped, too. Unfortunately, our contingent was short of riders, horses and rigs this year. But, in true Pony Express spirit, we received help to cover some miles at both ends of our Re-Ride distance. Colorado Riders came an extra 6 miles on our west end. Then the North Platte Riders started riding about 6.4 miles early to help us, Continue Reading 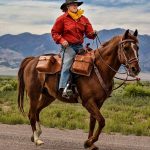 Grit in your teeth, hot, sweaty horses and people…

I started posting about the PX on 13 June and have several highly photographic blog posts up now! 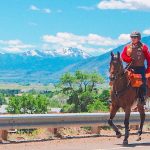 Thank you to all the incredible folks along the route to make this the best Re-Ride year to date for Red & I. Re-Ride 2016 for Red & I are in the ‘books’ and a very memorable one! Petra and Red on Jacks Valley Road My first leg started at Mormon Station, Genoa. I woke up early and checked the tracker and saw the mail making good progress by the California division. Jim De Glopper helped me load and provide ‘valet services’ for the day (his words and much appreciated!)., Continue Reading

Kudos to Re-Riders and their Ponies 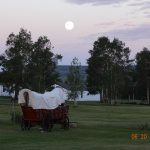 I was able to observe and photograph the riders north of interstate I-80 on granger road/oregon national historic trail (wy county highway #233), and follow them into granger, wyoming, on monday, 6/20/16. So many of the riders spoke about the full moon the night before, that i’ve included a photo of it, taken at 5 a.M., over ft. Bridger, wy, before i caught up to the mochila. As a “city slicker”, i’ve always been amazed at the hard work, dedication, and comradery shown by those on the trail and behind, Continue Reading