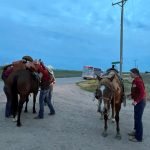 Mary Eisenzimmer took 4 pics of daughter Kallie as she was sworn in by Nebraska President Cathy Stevens, while Mary Cone looks on.   Kallie rode two different horses for the Nebraska crew.  Two of the hundreds of mochila exchanges that took place along the Ride. 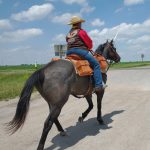 Here are some pictures from last Tuesdays ride through Jefferson County Nebraska. The riders are Richie and Mandi Hill, their children Sabrina and Blake plus grandma Deb Hill and Kara Riggle.

Haulin' the Mail by Chimney Rock! 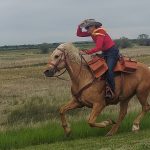 Torrential Rain, Hail and Wind Halt Pony for about an Hour SE of Hastings, NE. 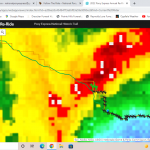 The Pony was scootin’ along just fine, on time–see the Green “on-time” rider icon in the second screenshot–when the skies opened up with fury!  The first screenshot, later in time, shows the storm moving on through and the Pony as then being late (Red icon) while it rode out the storm under cover.  These screenshots are courtesy of our tech wizards at National Park Service who have put a weather layer on the interactive map for everyone to use and enjoy.   Anyone can do this!   —  Stablemaster Mary 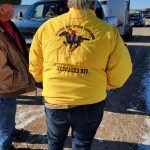 What could be more festive in central Nebraska than receiving a beautiful Christmas greeting via Pony Express? Since approx. 2000, the local members of the National Pony Express Association carry holiday greetings on horseback during a Christmas Re-ride. This year’s ride was held on December 11, 2021. After a snowy Friday, Saturday morning dawned sunny, clear and cold with temps in the mid 20’s. The mochila and two saddle bags held 687 pieces of mail, including Christmas cards, Thank You cards from a local wedding and letters/cards from Angela Johnson’s, Continue Reading 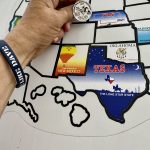 Roxy and I came from Pennsylvania to do the re-ride. By the time we reached trail captain Richard and Alice Heinrich’s we had traveled about 1800 miles and there’s was the seventh stop. The Heinrich’s make the re-ride a family affair. Richard did his 40th ride this year. He handed the mail off to us and we handed it off to his daughter Tina. They graciously put us up at their home. What a great experience. Eight years ago this month I lost my older son Davey. Roxy has carried, Continue Reading 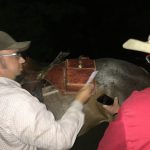 Rarely do we get the mail EARLY!!    But, we did this year.    Every year is different, doing this Re-Ride!    Just like in 1860, you have to expect the unexpected! We received the mochila south of Big Springs, NE, from the Colorado Riders, did the exchange, and left at 3:33 am MDT, 2.5 hours ahead of schedule.   The night was a bit sticky, not too cool, with a hint of a north breeze.   As we progressed, it cooled a bit and the breeze freshened.   We witnessed a glorious, Continue Reading 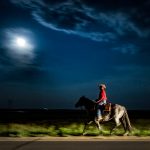