Pony Express Report Night Riders, Robert’s Creek Station 12 July 2017   The Night Riders of the Robert’s Creek Station, Travis Gerber and Andy Boyer, with the addition of two greenhorn recruits and the Nevada Division President, Arthur Johnson, were sworn in as Pony Express Riders on 13 June 2017 with strict instructions to see that the mail parcel in their charge be delivered safely from the top of the Diamond Mountains to Grubbs Well. Their former, long time Ride Captain, Steve Notterman, was unable to join them, and he, Continue Reading

Just like the sound of the horse hoofs beat falls silent in the fall of 1861, the last dispatched mail delivered and the horses and men disbanded onto greatness, so it is the same of the 2017 Pony Express Re-ride. Unlike the last ride in 1861, the mochila left St.  Joseph, Missouri with over 1000 letters, on their way to locations all over the world.  Leaving St. Jo with a shout instead of a cannon shot, it left at 3:00 PM, June 5, 2017, headed for Sacramento. The temperature reaching, Continue Reading 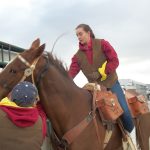 Our group from Nevada, the Schellbourne Re-Riders had a great time this year for the re-ride.  The evening before we picked up the mail, two of our riders got married out by the trail.   Rebecca Hulings and James Mossow exchanged wedding vows, had a reception party and hurried to Hicks Ranch to get horses ready to pick up the mail early the next morning. Then we had another surprise when Carol Hunt showed up at Hicks Ranch for the Re-ride.  Earlier in the year, she experience some very difficult, Continue Reading

WITH THE HONOR OF RIDING YOU ALSO HAVE THE RESPONSIBILITY OF RESPECTING THE HISTORY.

WITH THE HONOR OF RIDING YOU ALSO HAVE THE RESPONSIBILITY OF RESPECTING THE HISTORY. (THIS WAS TOLD TO ME BY A NEW RIDER) Re-Ride 2017 By Ron Bell VP   Saturday June 10th it is time to start getting the typical stuff ready to head out to join up with the crew in Eastern Nevada. I will make this drive on Sunday so to be at the Hicks Ranch to enjoy talking with all of the Schellbourne Riders led by Gene Ockert, Wendy Anderson and Tony Zamora. Dinner was great, Continue Reading 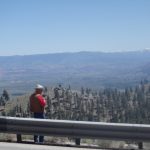 Rider Report – Petra Keller – Part 2 Team Ryan   Wednesday June 14, Day 2 for Red and I. Today, we have two legs to ride for Ride Captain Dale Ryan. Our first leg is the upper Kingsbury leg; this leg starts ½ way up Kingsbury Grade  (Hwy 207) and follows much of the old Kingsbury toll road. It is a 1500 + foot climb to the top. The second leg is to accompany Bob to Stateline, NV, short notice for us, as the original rider wasn’t able to, Continue Reading 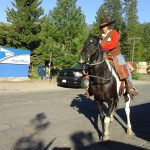 We started our trail in front of post office at South Lake Tahoe but before we went to see if the next trail was passible.  We got one third the way up and hit solid snow.  So plan B was put in place for the next rider.  While waiting for Nevada rider we found out he was bucked off and we went on a search and rescue mission to find his runaway horse. We heard the rider was fine but went to the hospital to be checked out.  The fire, Continue Reading 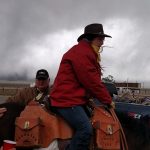 This is Ken Head KE6FTM California radio operator for section 2,  Shellbourne Rd. to Overland pass . WOW 10 + hours I will never forget, My only regret is me not making it the last 4.5 miles the trail would not support four wheels the last assignment was pulling truck and trailer out, thanks Gene Ockert and Ron Bell . Nevada has some of the Toughest Horses, the Toughest Men and Woman, and Toughest MUD I have ever seen. The riders heading off on their own into Butte Valley. Into, Continue Reading 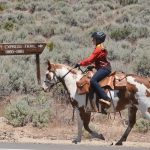 2nd year as a Ride Lieutenant

I just finished my second year as a Ride Lieutenant for the National Pony Express Re-Ride.  I started in Tahoe at the State Line on Wednesday June 14th at 3:15 (left Placerville at 1:00), rider was coming in at 5:30 (we have to be in place 2 hours ahead when we are in the mountains), followed my different riders down the mountain.  Normally I would have been done at XP Corral,  but while we were in Tahoe waiting, my co-pilot Cinder & I decided we wanted to go the whole, Continue Reading 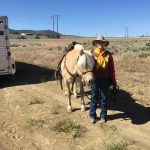 I think most of us have some sort of a “bucket list”.  One of the items on mine was to participate in the Pony Express re-ride.  I’ve been going to do it for the past couple of years, but it just didn’t work out.  This year the timing was right, I had the perfect horse and a friend to go with me.  We originally signed up for one leg from Mound House part way into Carson City with the Top Gun-Fort Churchill-Carson City group of riders.  We were later asked, Continue Reading