Here is a link to a movie I made featuring the Eagle Rock portion of the Pony Express National Trail. The mail passed by on the afternoon of June 26th.

The Re-Ride is a Trek of Extremes 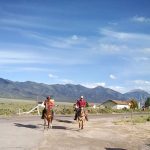 The 2014 Pony Express reride was a trek of extremes from Historic Old Sac CA to St. Joe MO. From mountain forest and rough water crossings to dry dusty desert ranges. High population areas to the solitude of vast range areas. The dry range in Nevada and Utah to vast grass range in Wyoming and western Nebraska to the irrigated areas of east central Nebraska with vast alfalfa and corn fields. Transitioning into the green grass and fields in eastern Nebraska and northeast Kansas after the spring rain. The weather, Continue Reading

FROM: The Officers of the National Pony Express
June 23rd, 2014 PDT

We would like to thank riders, members, family, friends and support staff that helped make the 35th Re-Ride a success. We would like to thank all the folks that offered us food, drinks or housing during our travels. It was great meeting and visiting with as many riders and members as we could. Words cannot express the gratitude we feel.

I know that this may be a little late,but I feel that we need to recognize the riders that took the time to carry the mail across Sweetwater County. We received the mail at 9:15 am on Monday June 16th from the Uinta group. The first rider received the Mochilla and we were off and running. The second rider was not able to make the ride so we did the usual, we adapted and improvised. We headed for Farson in hopes of making up some time. With the help of, Continue Reading

P/E 2014, East Canyon & Henefer, UT   My pics with a pocket camera don’t compare to the others you’ve received, but you asked if I would send you mine from this years re-ride. I don’t know any of the riders by name, as I’m just a spectator, but love to watch the riders, horses, and support folks. Maybe the Utah riders & other photographers can help identify those I’ve captured in my pics.   I had planned on taking my pics near This Is The Place Heritage Park &, Continue Reading

CO rider talking the first mile is Bob Ellis, CO director. Storm followed NE and was a major factor in the evening ride. Tornado just outside Ovid, CO which CO rides thru caused concern.   Wishing a safe ride for all who follow us to St Joseph, MO. Thanks to you for all the dedication and hard work to keep us updated along the trail.

Thank Lyle and Dean for their support

I want to thank Lyle and Dean for their support, and following up on the entire trail! By now, I know they are getting pretty tired (I can still remember George and I’s trip, of course) and the many memories they will always carry with them! You are doing a great job reporting along the trail, Lyle, and thanks for the pictures, also!!!   I also want to thank Sherry Mattingly, my step-daughter for taking pictures of group 2 and posting them. She was scurrying the whole time through traffic,, Continue Reading

The name of the game was weather-the nasty kind!

The 2014 Re-Ride of the Pony Express will be a memory to long remember for the Keith County, Nebraska Re-Riders!! The name of the game was weather-the nasty kind!   You’ve read previously about the Colorado Riders coming through the tornado warning, rain, lightning, hail, wind………wow, I don’t know how they did it!! And in the dark, no less. Great job, Colorado!   As our group’s ride time approached, we were making phone calls, trying to figure out when to gather, waiting out the tornado warnings in a safe place., Continue Reading

Riding through rain and sleet at times

Received the mail 45 min early from the Colorado riders (1245 am Mnt) due to some of our riders being held up due to area storms (tornado’s, wind, heavy rain and hail) the pony left Big Springs ahead of schedule. Riders had to ride in rain and sleet at times. While others stopped along the way clearing tree debris off the roads so we could get rigs and ponies through. Due to the heavy rain and road conditions it forced us to change our path of travel but all riders, Continue Reading

News from Colo. Division. 6 miles in ran into rain, lightning, hail, tornado! Took shelter! Then continued on watching the sky for a second storm cell that was moving our way. Should get to Big Springs 12:30-1:00. Sent: Wednesday, June 18, 7:42pm by Lisa Marie Chappell, NE. Colorado division picked up the mail at 8.44 mountain time.1:45 hours ahead of schedule. Big storm on our tail.