We arrived at the entrance to Top Gun Raceway on Schurz highway at around 2 AM the morning of June 19, 2019. I had met Alina and her mom Mary Alice at their home in Washoe Valley at 12:15 to drive out to Top Gun together.  We loaded up Belle and headed out.   Cassidy and Logan drove out from Silver Springs with TomTom and Costa and met us there.  We saddled up and watched the horizon for the bouncing twinkling light that meant the rider was coming.  Mary Alice stayed with us while we waited, and we used Cassidy’s truck and trailer to make our run over the hill covering the first 23.5 miles of our section.  Once we left, Mary Alice drove around on the highway to meet us at Ft Churchill.

As we were waiting a nice group of people trickled into the exchange point on Schurz Highway, including Ron Bell, and our HAM Radio operators and support for the inbound rider.  Finally we spotted the rider coming in.  The mail was a bit late, scheduled for 3:30 AM and we received the Mochila at 4:50 AM as dawn was barely visible as a pale yellow strip on the horizon.   I was the first rider out, riding Costa, with Cassidy and Alina in the truck and Cassidy’s boyfriend Logan driving.  It was the first time we had a driver that was not riding.  It was really nice having that extra person along.  Not only did he drive, but he kept track of our mileage, helped load and unload horses, and walked the horses when needed in between riders. He also helped to exchange the Mochila.  It was pretty heavy! Logan was a huge asset to our team.

Once we were off, we exchanged horses and riders after every 3 miles, Cassidy on TomTom taking the second leg, and Alina on Belle the third, with the HAM Radio guys staying behind the rider, and the truck and trailer passing the rider and heading out to the next exchange.  The horses seem to be able to handle a 3 mile stretch at a decent speed, and it provides enough time to load the horse, get ahead of the rider, and be ready 3 miles ahead for the next exchange.  We are pretty quick with our exchanges, and we knew we could make up some time in the saddle too.  Our first 8 miles the trail is rocky but we managed 9.6 MPH including the exchanges.   Our fastest section was 10 miles from Cow Camp to Hooten wells.  As the sun came up we were able to carry a 12 MPH average speed on that section with 4 exchanges.  The trail going over the mountain is pretty smooth so we were able to grab a gear and GO!!

We had a photographer Bob Tregilus who wanted to take some early morning photos of us and we met up with him east of Hooten Wells.  He got a few good shots of us and followed the team to Ft Churchill.

The next 5.5 miles west of Hooten Wells we were able to maintain 11 MPH. The trail from Hooten Wells to Scout Camp is pretty smooth, although rutted out in some areas.  It was still a really good trail, and you could see the bumps ahead so you could slow down a little to navigate them.    Alina had the last leg into the Exchange with Stephanie and boy did she fly!!!  Since it was a short go I told her she could just ride on down there at her own speed.   She said she had a lot of fun putting on the afterburners!!

Stephanie drove in from Ft Churchill to meet us at that point, and rode her 3.5 mile section on Louie at 10.5 MPH. Stephanie could not ride the whole section because she was riding as a flag girl in the Reno Rodeo this year.  There are sometimes just not enough hours in a day!  She really wanted to ride and we made it happen with a short 3.5 mile section. I drove her truck to the next exchange, where Jim and his horse Mia were waiting with his support team Lynda and Dorothy.

Jim had a very important role on our team, crossing the Carson River Bridge.  I had asked him if he wanted to take that section, and he went out and pre-rode it and agreed to do it.  It’s a little stressful for everyone when the horse and rider is on the bridge which is the right of way of Highway 95A.  I had contacted the Lyon County Sheriff in advance to ask for support from them.  On the morning of the ride I was contacted by NHP Trooper Anderson who was planning on meeting us at the bridge.  Since we don’t have good cell reception for calls on our section, I sent him text updates and he was there waiting for us when Jim arrived at Highway 95A and made the right turn onto the right of way.  The flashing blue and red lights on the NHP vehicle is very effective in slowing traffic.  I never got to meet him face to face, but I sent him a big thank you text for helping us out.  He called me back after that and asked if we needed any help down the trail.  He gave me the contact info for the dispatcher who would be able to coordinate additional support.  I forwarded that info to Anne Martins since she had mentioned that she might need some help in the Moundhouse area due to equipment on the shoulder there.

Jim rode a steady trot from the troughs just east of Scout camp, across the bridge on 95A and came into Ft Churchill at 8:00 AM with an average speed of 6.75 MPH for his 4.5 mile section.

We were all pretty stoked to have made up just over an hour of time, since we received the mochila an hour and 20 minutes late.   We took care of our horses, and didn’t over ride.  Everyone arrived at Ft Churchill healthy, safe and happy!!

Huge thank you to Trooper Anderson, and the HAM radio operators for helping to keep us safe on the trail.  Thank you to Logan, Mary Alice, Dorothy, and Lynda for being there to support us in this fun event.  Big thanks to Cassidy for using her truck and trailer on that bumpy road. Thank you to my awesome team, Cassidy, Alina, Stephanie, and Jim for their work and  preparation to make this ride smooth and fun.  Most importantly I appreciate the horses.  They are the one thing we could not do without.  Their willingness and athleticism are just incredible.

Thanks to those who rode before us and after us.  Truly a great team. Looking forward to 2020 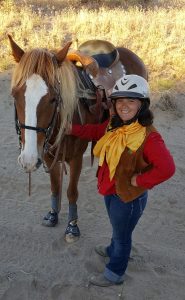 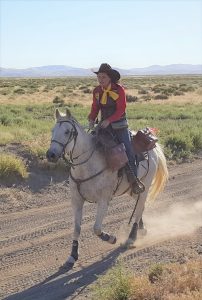 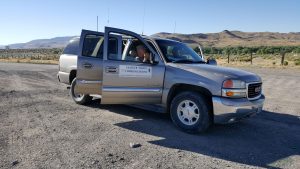 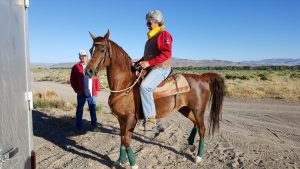 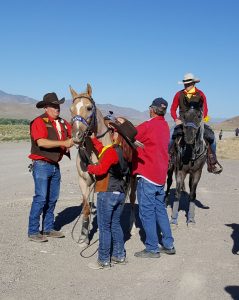 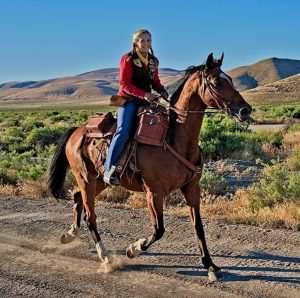 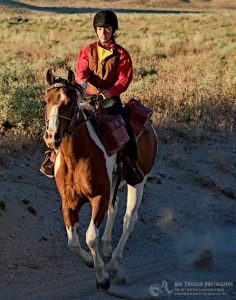